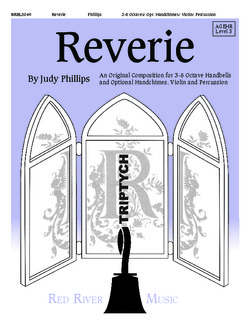 Reverie
Reverie" may be programmed with two other pieces, "Rhapsody" (RRBL5048) and "Roundelay" (RRBL5048), to create a three movement work entitled "Triptych". A free tempo is scored along with 3 handchimes-- F4, G4, and C5. Martellato lift on bells and vibrato on handchimes combine for an unusual introduction and lead to an open-structured, airy melody and accompaniment. Later sections use mallets on suspended bells and LV technique. "Reverie" is scored in F Major and G Major and is 145 measures.

Carol of the Bells

God is a God of Love