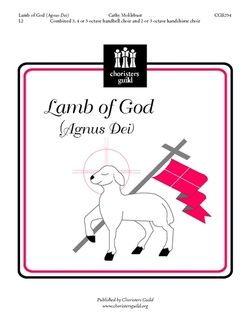 Lamb of God
2 or 3 octaves of handchimes combine with 3-5 octaves of bells to perform this original composition, which was commissioned for a church celebrating a centennial anniversary. The handchime part may be played on a keyboard, with some modifications. The music is to be played with much expression as it grows from a reflective mood to a stronger feeling as the music moves toward the climax. After this moment the music becomes even more simple and sustained like an "amen". It is 69 measures and is composed in F Major.