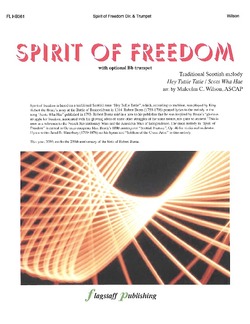 Spirit of Freedom
"Spirit of Freedom" is based on a traditional Scottish tune "Hey Tuttie Tatie", which, according to tradition, was played by King Robert Bruce's army at the battle of Bannockburn in 1314. Robert Burns penned the lyrics to the melody in the song "Scots Wha Hae" published in 1793. The main melody in "Spirit of Freedom" is central to German composer Max Bruch's 1880 masterpiece "Scottish Fantasy", Op 46 for Violin and orchestra. The year 2009 marked the 250th anniversary of the birth of Robert Burns. Please note that the trumpet score is printed in the concert key, not transposed for the trumpet, and there is no separate trumpet score.