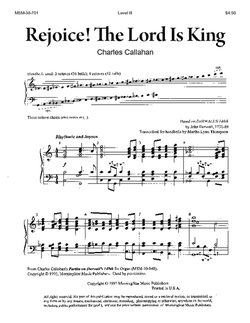 Rejoice the Lord is King
Martha Lynn Thompson has based her transcription on DARWALL'S 148th taken from Charles Callahan's Partita on Darwall's 148th for organ. The mood of the work is stately and ceremonious. The tonic and dominant of the key of C are emphasized with mart-lifts. The final section does contain several chromatic changes from chord to chord, which contributes to the plus on the level II marking. Triumphant shaken measures end the piece.

Angels We Have Heard On High