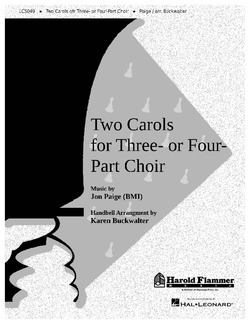 Two Carols for Three or Four Part Choir
"Alleluia, Sing Noel!" and "Angels We Have Heard on High" have been set for SAB or SATB voices, keyboard and optional handbells. The bells parts are full and play most of the time. Several techniques are called for to give extra sparkle to the bell parts. The first carol is based on a Spanish carol, the second is the traditional French carol with words and music for both by Jon Paige. Karen Buckwalter contributed the handbell accompaniment.

Hymns for Worship and Celebration