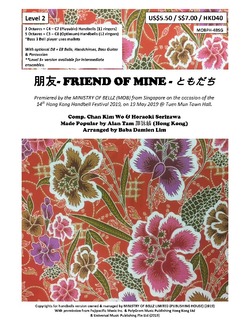 Friend of Mine
A very popular solo turned community sing-along tune of the 80s, which was popularized by Hong Kong pop singer Alan Tam. This song was widely sung throughout Asia at its time, because of its lyrics & melodic phrases. The song had the ability to arouse the emotions of the people, to encourage understanding, empathy, cooperation & most importantly, PEACE, especially in times of the uncertainties during the Cold War & tensions in the Middle East & various parts of the world, including the Falklands War and in later years, the 1st Gulf War. One could say, this song was Asia's answer to We Are The World, something to bring mankind together, to remind us that we are FRIENDS!

Lo How a Rose E'er Blooming