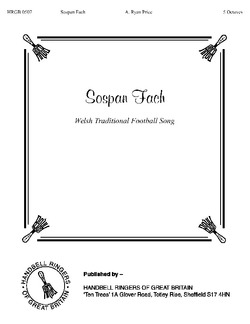 Sospan Fach
Sosban (or Sospan) Fach (Welsh for "Little Saucepan") is a traditional Welsh folk song. It is one of the best-known and most often sung songs in the Welsh language; it is based on a verse written in 1873 and catalogues the troubles of a harassed housewife. More recently the song has been associated with the rugby union football club Llanelli RFC. This arrangement is by A. Ryan Price builds to an exciting crescendo reflecting the progress of a rugby match. Ryan, himself a Welshman, is a former National Chairman and Honorary Life Member of Handbell Ringers of Great Britain. 69 measures. Key of a minor.

Let's All Ring the Classics

Songs For the Solo Ringer

It Came Upon the Midnight Clear