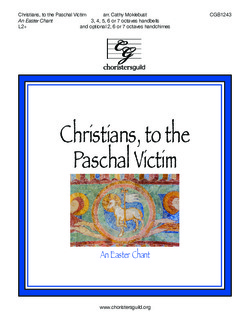 Christians to the Paschal Victim
"Victimae paschali laudes" is a sequence prescribed for the Catholic Mass and some liturgical Protestant Eucharistic services on Easter Sunday, and is one of the few sequences that are still in liturgical use today. It is usually attributed to the 11th-century Wipo of Burgundy. Cathy Moklebust's 3-7 octave arrangement of this medieval chant begins with a simple original melody, which is also used as an interlude between sections. The chant follows, accompanied by an LV bass line, then again with optional handchimes in canon. The final portion grows in texture, volume, and intensity to the glorious "Amen. Alleluia!"

Lord Send Out Your Spirit

Now He Is Born