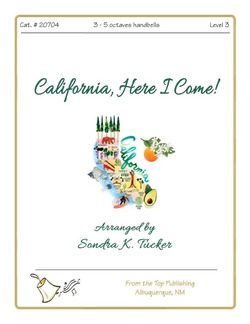 California Here I Come
It seems as if this song should be the 'State Song' of California, but several attempts at doing that have failed. However, it has been used frequently in a wide variety of settings – from cartoons (Bugs Bunny as Rabbitson Crusoe) to I Love Lucy episodes and as background to PBS's California State travelogue series as well as in many movies. It even was played on the USS Yorktown as it steamed toward the Battle of Midway in WW2, and as President and Mrs. Reagan left Washington at the end of his presidential terms.

Sondra has created a delightful and completely accessible arrangement for handbells. The bass is mostly malleted, and her creative treatment of the melody, dynamics, and the dancing, upbeat tempo will make this a wonderful staple in your concert repertoire!

Christmas Carols for 3 to 6 Ringers

Joseph and the Coat