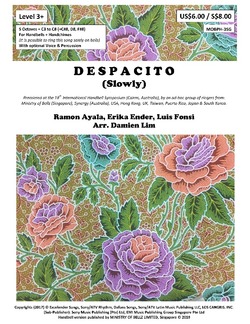 Despacito (Slowly)
With 5.3 billion views, making it the most watched video clip ever on youtube. DESPACITO is a song by Puerto Rican singer Luis Fonsi, featuring Puerto Rican rapper Daddy Yankee. On January 12, 2017, Universal Music Latin released "Despacito" and its music video, which shows both artists performing the song in La Perla neighborhood of Old San Juan, Puerto Rico and the local bar La Factoría. The song was written by Fonsi, Erika Ender, and Daddy Yankee, and was produced by Mauricio Rengifo and Andrés Torres. A remix version featuring Canadian singer Justin Bieber was released on April 17, 2017, which helped to improve the song's chart performance in numerous countries, including various number-one positions. "Despacito" has been widely credited by several music journalists as being instrumental in popularizing Spanish-language pop music in the mainstream market again. (Reference from Wikipedia) This handbell/handchime version, arranged by Singaporean percussion artiste/handbell director, Damien Lim, may be performed solely on handbells, with or without percussion. Although it's scored for 5 octaves of bells mixed with chimes, a bell choir may still perform this work with under 10-11 ringers, since the bass bells (C5 & below) may be managed by fewer ringers using the mallets on bells. This is a highly rhythmic piece, which promises to be a familiar hit, turned hip thumping & foot tapping for your ringers & audiences. 70 measures.