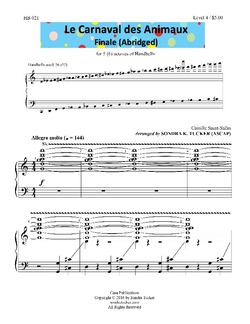 Le Carnaval des Animaux: Finale
This abridged version of the Finale from Carnival of the Animals will cap off an exciting tour through the animal kingdom! Carnival of the Animals was composed by Saint-Saens in 1886, and he originally scored it for two pianos, strings, flute and piccolo, clarinet, glass harmonica, and xylophone. Cellist Charles Lebouc staged the first performance at a private concert on March 9, 1886. Saint-Saens was insistent that the work not be published in his lifetime for fear that it would mar his reputation as a composer of serious music. He later allowed publication of The Swan, the next-to-last movement, for cello with piano accompaniment. After his death, the firm of Durand in Paris published the entire work, which remains popular today. 60 measures.

Ostinato in A Minor