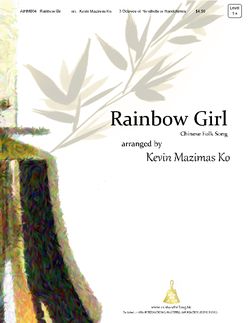 Rainbow Girl
Rainbow Girl is the English translation of the Chinese words "Hung Cai Mei Mei". The piece is a love song among the tribes in the northern part of China. There isn't any clue to find out who the composer might be. However, it is known that the piece was composed roughly between 1915- 1935 (the early formation of Republic of China). The tune is a combined culture of Mongolia and the Han people (the main tribe in China). In 1938, a drama director Wang Luo-Bin rearranged the song as one of the selections used in his dramas. To this day the song has been transcribed into a children's song, choir song and even pop song. 80 measures.

In A Tiny Manger