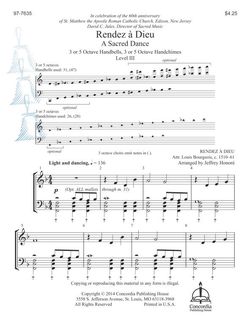 Rendez a Dieu
An arrangement by Jeffrey Honoré of the French tune attributed to Louis Bourgeois for 3 or 5 octave handbells and 3 or 5 octave handchimes. This tune is used with several hymn texts, including, “Father, We Thank Thee,” “Mark How the Lamb of God’s Self-Offering,” and “New Songs of Celebration Render.” Begins in the key of F Major, then modulates through the keys of Bb Major, G Major, C Major, and F Major again before ending in the key of G Major. 88 measures.

Now Thank We All Our God