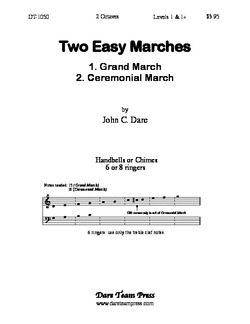 Two Easy Marches
This flexible arrangement for 2 octaves contains two short, stately marches--"Grand March" and "Ceremonial March". There are no page turns in either one of these Level 1 compositions for 6 or 8 ringers, but "Ceremonial March" has one bell change for C6. Both pieces are scored in G Major.

Beloved Let Us Love One Another

Child is Born in Bethlehem, A