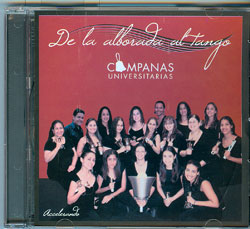 De la Alborada al Tango
Campanas Universitarias is the handbell choir of the University of Puerto Rico, Rio Pedras Campus. It was founded in 1997 by its director, Dr. Neida Munoz de Frontera. Its members are UPR students, alumni, and employees. Besides playing in local festivals, the group has traveled and performed across the United States(including Disney World in 2002), Canada and Australia for International Symposium, and several countries throughout Europe. The group has founded and hosts three community events: Children and Young Pianists Competition(since 2001), Mosaics(concerts of student ensembles, since 2006), and the University Bell Choir Exchange(with the University of Southern Mississippi, since 2006).

Why the Chimes Rang