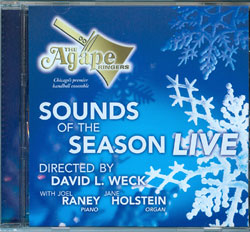 Sounds of the Season Live
Under the baton of founder David L. Weck, this auditioned handbell ensemble has been astonishing audiences from England to New England and from San Juan to the Pacific Northwest with their beautifully orchestrated presentations of entertaining and varied music. From their first appearance in 1992 with the West Towns Chorus, ensemble members have thrilled to share their love of handbell ringing in more than 200 solo performances, as well as concerts with the North Shore Choral Society, the piano/organ duo of Joel Raney and Jane Holstein, and the Illinois Brass Band. In addition, they have been heard by directors around the ringing world on all promotional recordings for Hope Publishing's handbell catalog since 1992.

Hear How the Bells of Christmas Play