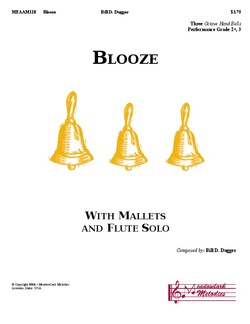 Blooze With Mallets
Meadowlark Melodies Co. is owned by Bill D. Dugger and he is the composer/arranger of all titles in that catalog. Mr. Dugger writes that many of his works include, "aspects of music not traditionally included in handbell music." World music also influences his writing. This piece includes a short part for flute in its "bluesy" score. Triplet figures, syncopation, and dotted eigth-sixteenth note patterns are found throughout its 49 measures, which, all except the last chord, are played with mallets.

Let All Together Praise Our God

We Meet as Friends at Table