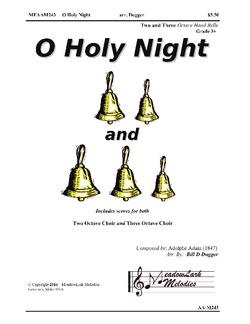 
"O Holy Night", originally written in French and titled "Cantique de Noel", is a well-known Christmas carol composed by Adolphe Adam in 1847 to the French poem "Minuit, chretiens" (Midnight, Christians) which was written by wine merchant and poet, Placide Cappeau (1808-1877). The song was originally intended for solo voice, but has been arranged and reset for a variety of voicings and instrumentation over the years. This setting is for two or three octave handbell choir and is abbreviated to make it more accessible and performable by smaller groups. Scores for both 2 octave version and 3 octave version included in the folio.