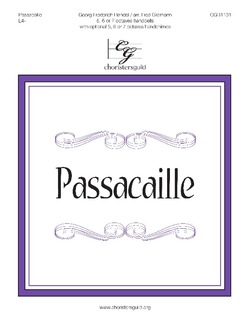 Passacaille
Set in G minor, a key which French composer Charpentier alluded to as “severe and magnificent”, Handel’s Suite No. 7 for harpsichord captures those sentiments in this set of variations. “Passacaille”, the French term noted by Handel in the original score, is more commonly known to us in its Italian variant, Passacaglia. Handel’s version breaks from the norm in that it is in 4/4 instead of 3/4, and in place of a constant bass theme there is a repeating series of chords used as a support to the variations. As Handel gradually increases the complexity of the subdivisions, he also surprises us by straying into a more chromatic language, providing a fun challenge for the ringers. The effect of plucked harpsichord strings finds its way into this transcription through the occasional use of mallets. 68 measures.

Wind In Our Sails