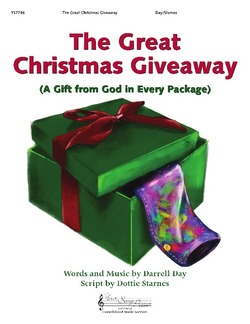 Great Christmas Giveaway
Edwin Boniface is a Scrooge-like character completely caught up in his own little world and while he isn’t as anti-social as the Dickens character, he does tend to ignore anyone or anything other than his dry cleaning business. At the insistence of his mother, Edwin begrudgingly takes on the responsibility of selecting Christmas presents for his family members, a task formerly taken care of by his late wife.

It’s late when Edwin finally finishes his work for the day and all the stores are closed. As “luck” would have it, he stumbles across a street peddler, from whom he attempts to buy one item. The peddler insists that he buy all the remaining merchandise. Not knowing what he will do with the extra items, Edwin eventually agrees. Upon closer inspection, he discovers that he now has a gift for everyone on his list and he hurries back to his office to wrap them. However, to add insult to injury (in his eyes), Edwin is forced to hand-deliver the gifts to his relatives, as it is too close to Christmas for them to be sent through the post office. Disgruntled, Edwin sets out to play Santa.

With the help of a new-found friend and a little Christmas “magic”, as Edwin interacts with his family, he comes to realize that Christmas is about more than simply giving presents to those closest to you. He sees that his gifts, so reluctantly given, have impacts far beyond what he could have imagined. Through the grace of God, they have become “The Great Christmas Giveaway.”

A musical for 12-13 adult singer/actors plus choir, with keyboard and handbell accompaniment.

Concertato on Lord You Give the Great Commission

It Came Upon the Midnight Clear