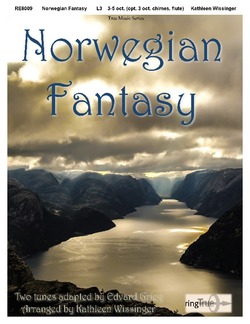 
“Norwegian Fantasy” blends two tunes that Edvard Grieg adapted for his own use in the early 1900’s: Springdans (Opus 17 – a collection of Norwegian folk tunes) and “Den Store Hvide Flok” (“Great White Host” – the hymn tune for “Behold, a Host, Arrayed in White”) from the 17th century. While not common tunes, they feel familiar and timeless – as many folk tunes do.

This piece was commissioned to honor the memory of Nancy Telford, a beloved handbell director and active leader in Area X of the Guild. “Great White Host” was a favorite lullaby of hers, hence the music box introduction. After a full introduction of the first tune, the piece segues into lively Springdans and then layers the two tunes with typical Grieg-like grace notes and flourishes. A final bold statement is followed by winding down the music box for a gentle ending.

Edvard Grieg is a favorite composer of Kath Wissinger; she played many of his works during her years of piano study. This piece combines her delight in honoring Nancy and in translating Edvard Grieg’s unique musical voice for handbells. Level 3 for 3-5 oct. (with optional B2) with optional 3 oct. chimes (F4-C6) and flute, “Norwegian Fantasy” is appropriate for concert, festival and worship, as well, using the subtitle “Behold a Host” celebrating the communion of saints. The flute (or C instrument) adds its own color to the piece, rarely doubling the bell part.

Day with God's Sun, A