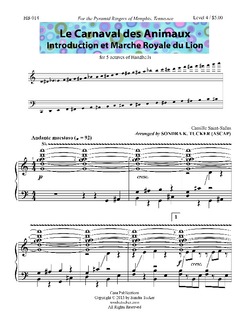 Le Carnaval des Animaux: Introduction et Marche Royale du Lion
Now, Saint-Saens's masterwork is available for handbells! This exciting overture will get your concert off to a fine start. Carnival of the Animals was composed by Saint-Saens in 1886, and he originally scored it for two pianos, strings, flute and piccolo, clarinet, glass harmonica, and xylophone. Cellist Charles Lebouc staged the first performance at private concert on March 9, 1886. Saint-Saens was insistent that the work not be published in his lifetime for fear that it would mar his reputation as a composer of serious music. He later allowed publication of The Swan, the next-to-last movement, for cello with piano accompaniment. After his death, the firm of Durand in Paris published the entire work, which remains popular today. This bouncy, fun work is a great introduction for the larger work. 71 measures. Key of a minor.

All Praise to Thee Vol 3