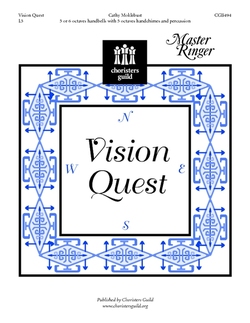 Vision Quest
"Vision Quest" is a four-movement work that illustrates the "vision quest," which is a period of spiritual seeking among some Native American peoples. The movements speak to each of the four directions, using recurring but changing and evolving themes, reflecting each petition of the prayer. The first movement is decidedly perplexing and "confused," and as the work progresses, a myriad of emotions are depicted, until at last solitude and enlightenment are achieved. In the words of David Dillon, "The important part of the vision is that we all come from the same Source and are part of each other and even nature. We are all family." Dillon idicates that he wrote this prayer in the style of a prayer by Black Elk (1863-1950), an Oglala Lakota (Sioux) holy man.