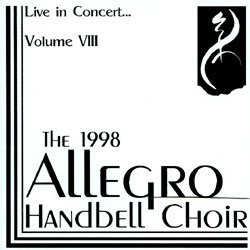 Live in Concert 1998 Allegro Handbell Choir Volume VIII
The Allegro Handbell Choir was formed in 1971 and since then has been a strong part of the music program at The Union Church of Hinsdale (United Church of Christ). There are currently thirteen members ages 15 to 18 who have been ringing two to eight years. Their concert programs include sacred and secular music ranging from the 17th to the 20th century. In addition to participating in the music program at Union Church, the group has performed for a variety of civic, charitable, educational, and professional organizations, on Chicago television programs, as well as guest appearances at other churches. The Allegro Handbell Choir, since 1975, has toured Europe five times and has toured throughout the United States and parts of Canada.

Go Tell It On the Mountain

Ceremony of Lessons and Carols

Impressions of the Season