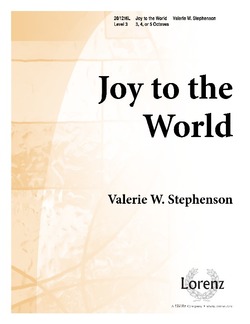 Joy to the World
The "Joy" in the title is depicted in several ways in this setting based on the hymn tune "Antioch" by G.F. Handel. A strong bell "peal" opens the numbers and leads into the tune on top of treble chords with martellatos and mallets on the syncopated accompaniment. Shakes and echos appear later in an open-spaced passage, which later build to a grand ending.

Standin' in the Spirit