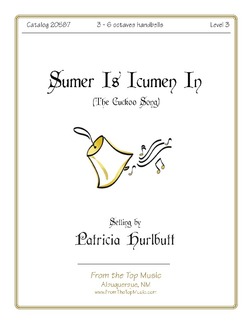 Sumer Is Icumen In (The Cuckcoo Song)
"Sumer Is Icumen In" translates as ‘summer has arrived,’ and is sometimes known as “The Cuckoo Song". This mid-13th century rota – or round – is dated back to a manuscript from the mid-1200s. Patricia has created a delightful arrangement complete with ‘cuckoo’ bell snippets represented in the score, and the development is delightful from beginning to end. It begins calm yet lightly dancing with melody appearing in both treble and bass staves.

The addition of stopped technique of your choice (Pl, mallet, TD) moving into a full-out joyous iteration includes several beautifully developed key changes. It literally dances to the end and is filled with unbridled joy representing the coming of summer. This is definitely a “must-have” for your ensemble. 89 measures. G Major, C Major, D Major, B Major, Ab Major, with a return to C Major to end.

So Long Ago on Christmas Day