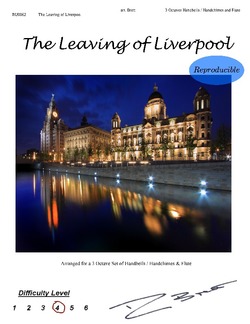 Leaving of Liverpool
"(The) Leaving of Liverpool", (Roud 9435), also known as "Fare Thee Well, My Own True Love", is a folksong. Folklorists classify it as a lyric lament, and it was also used as a sea shanty, especially at the capstan. The song's narrator laments his long sailing trip to California and the thought of leaving his loved ones (especially his "own true love"). He pledges to return to her one day. "The Leaving of Liverpool" has been recorded by many popular folk singers and groups since the 1950s. The Clancy Brothers and Tommy Makem had a top 10 hit with the song in Ireland in 1964.[2][3] The song has also been adapted by several artists, most notably Bob Dylan. This reproducible arrangement for handbells is 97 measures and includes all necessary parts.

Creative Use of Descants in Worship, The