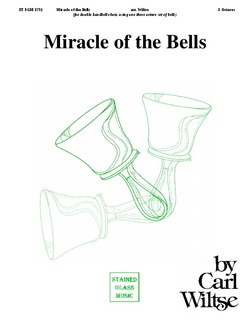 Miracle of the Bells
Early in the morning on Wednesday, January 24, 1979, the sanctuary building of the First United Methodist Church in Holland, Michigan caught fire. Much later, after it was finally safe to enter the building, a search was made for the five-month-old set of handbells – or whatever was left of them. Although the choir room was gutted, even melting the choir robes, the bells were found in their waterlogged, sooty cases. Except for some discoloration from the water, and soot which had settled on and in the bells, it was obvious that they were playable. That Saturday, the handbell choir members disassembled the bells, cleaned each part carefully, and reassembled the bells, so that the next morning they could be played in church before a tearful, appreciative congregation. Although “Miracle of the Bells” is not intended to contain any programmatic reference to the fire, and the discovery of the bells, nevertheless it has been composed in a spirit of joy and thanksgiving for the “Miracle of the Bells.” For double handbell choir, using one three octave set of bells.

Four By Four Christmas Carols for Piano and Four Ringers