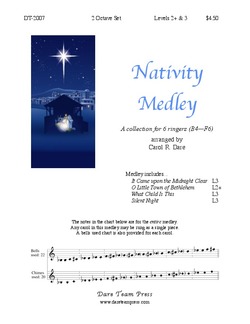 Nativity Medley
This medley for six ringers (B4–F6) contains four familiar carols: "It Came upon the Midnight Clear" (D Major), "O Little Town of Bethlehem" (Ab Major), "What Child Is This" (G Minor) and "Silent Night" (C Major). Although the score calls for both bells and chimes, it can be played with only one tone color. Short bridges between carols make this medley flow smoothly; however, any carol in the medley may be rung as a single piece. Directions are included for using the transitional measures as an introduction to single carol. The 6/8 meter in three of the carols designates them as Level 3; many quick bell changes could also be considered Level 3. The meter should not be a problem if the ringers are familiar with these carols and alternative assignments are suggested for the difficult bell changes. Ideal for any Christmas Eve service, this medley would be a genuine asset for choirs that will be short a few ringers during the holiday season.

I Am So Glad

Just a Closer Walk With Thee