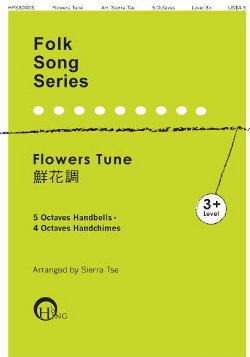 Flowers Tune
Written for the 15th International Handbell Symposium in 2012, Liverpool, UK, "Flowers Tune" is a popular Chinese folk song dated back to the 18th century, during the period of the Qianlong Emperor of the Qing Dynasty. There are many versions of the tune originated from different provinces in China, with two more well-know ones are from Jiangsu Province and Zhejiang Province. Over the years, this lovely song gained popularity both in China and abroad. It was used in Puccini's Italian Opera 'Madam Butterfly' and performed during events such as 2004 Summer Olympics, 2008 Summer Olympics and 2010 Shanghai Expo opening ceremony.