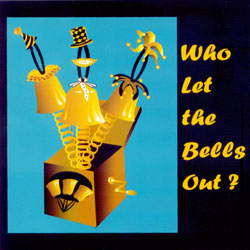 Who Let the Bells Out
The Carol Ringers, the Celebration Ringers, the Jubilee Ringers (each with fourteen youth) and the Peace Ringers, eighteen adults, perform a repertoire of classical, sacred, folk, popular, and seasonal music. Each choirs plays in worship once a month and presents concerts in the community. The choirs have a reputation for excellence which has grown over the years. The choirs have performed with the Air Force Band, at the White House nine times, the National Gallery of Art, the Kennedy Center, and been aired on many nationwide television stations. They attend festivals each year, many times as a showcase choir. They have made five recordings in 30 years: a Christmas CD; Brillante; Got Bells; Who Let the Bells Out?

One Faith, One Hope, One Love