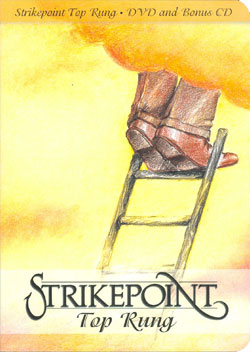 Strikepoint Top Rung
Strikepoint, from Duluth, Minnesota, is a church-based handbell ensemble with a community group feel. Led by "Player/Coach" Bill Alexander, this eleven-member group performs in a directorless ensemble setting. College students and community members have joined with selected ringers from the seven bell choirs at Duluth's First United Methodist Church to provide a consistently high level of musicianship since Strikepoint began in 1984. 'Pointers are often high school students, and sometimes as young as 13. Attitude, toward music and people, is an important factor in considering a potential ringer. Strikepoint's stated philosophy includes the goal of making the very best music possible and experiencing the social interdependence and dynamics found only in a group of this kind. Or, as one member put it, "Good Music, Good Food." Pizza parties and brownies play an important role in the Strikepoint culture. While the ringers take their music seriously, everything else is fair game.