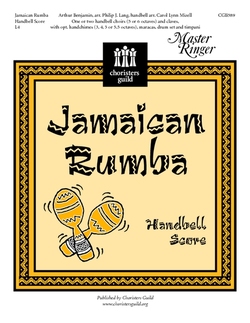 Jamaican Rumba
It was on his travels to the West Indies that Arthur Benjamin discovered the native melodies on which this piece, his best-known, is based. This energetic arrangement lends itself to "dueling handbell choirs" and "dueling treble bells and bass bells" as it progresses through the two musical themes in various keys. The two melodies combine nicely beginning in measure 85. Whether played by one or two handbell choirs, the contagious energy of this piece will make it a favorite for concert programming. (When rung by 2 choirs, follow the designations in the music.) Frequent key changes, including Eb Major, F Major, Bb Major, and Ab Major, keep ringers on their toes in this busy arrangement totaling 109 measures.