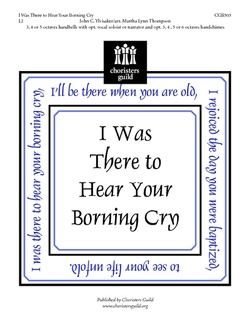 I Was There To Hear Your Borning Cry
The ethereal opening and closing motifs, played on randomly-malleted suspended bells, suggest the mystery surrounding the beginning and ending of life. The music of the stanzas depicts the various stages of life as described in the hymn text. The third stanza is written for handchimes (optional) beneath a descant played with mallets on suspended bells. Mirroring the opening section, the piece grows softer until the final malleted chord. An optional hymn page for vocal soloist is included. If desired, the hymn text may be read by a narrator, beginning each stanza at the places indicated within the score. Set in G Major, this piece is 64 measures.

It's Only a Paper Moon