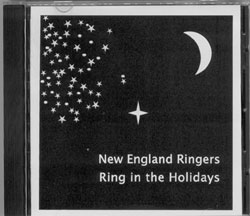 Ring in the Holidays
In 2000, a few ringers formed an ensemble for the purpose of attending a national handbell event in Buffalo, NY and ringing in the advanced division there. Following the Buffalo event, some of the ringers wanted to continue their association in order to perform challenging music at a professional level. In the fall of 2000, the core group recruited a director and invited skilled ringers to attend open rehearsals of a new performing ensemble, New England Ringers. Thereafter, membership was offered to qualified and interested ringers; rehearsals began in earnest early in 2001.
NER rehearses about twice a month in Greenfield, MA; some ringers travel more than two hours each way to rehearsals. Ringers are expected to spend significant time preparing their music on their own. Members (with the help of a few willing spouses and friends) perform all the tasks of running the group, under the guidance of an elected Executive Committee. Neither ringers nor director are paid. NER performs on a core instrument consisting of five octaves of Schulmerich handbells, received as a gift from an anonymous donor in 2003.
Our Director
Edward G. Henderson, Jr began ringing handbells in 1962 (he claims he was only 2 at the time!) and has been directing youth and adult handbell choirs since 1985. Ed has served on the Board of Directors of the American Guild of English Handbell Ringers (AGEHR) in various positions for many years, and has been an organizer, clinician and conductor at numerous local, area and national handbell events.

How Great Our Joy