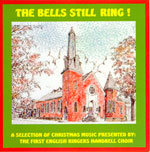 Bells Still Ring
Handbells have been a significant part of the ministry at First English Luhteran Church in Punxsutawney, PA since the mid-1970's, when the first 2 octaves of Schulmerich handbells were purchased by Mrs. Mary Zeitler in memory of her husband Franklin. She trained and directed the first groups of ringers until her semi-retirement in 1979. Since that time the handbell choirs, both youth and adult, have been directed by Laurie Glover Spence. In the mid-1990's a third octave of Schulmerich handbells were added.

I Want to Walk as a Child of the Light