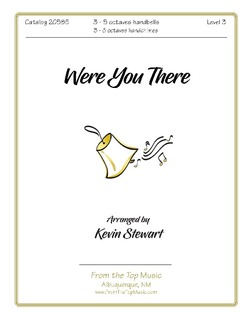 Were You There
This spiritual was likely written in the 19th century by enslaved African-Americans and was published in Old Plantation Hymns at the turn of the 20th century. It is reported that it was one of Mahatma Ghandi’s favorite hymns. Kevin has shown wonderful creativity in this handbell arrangement while remaining true to the original melody and spirit of this song. It is filled with great expression with a variety of dynamics from pianissimo to forte and deep sorrow is conveyed in the chordal accompaniment. The plaintive sound of the handchimes and the inclusion of well-placed minor passages will inspire the congregation. 79 measures. Begins in C Major, with hints of c minor, then modulates to D Major.

Five By Five for Christmas II