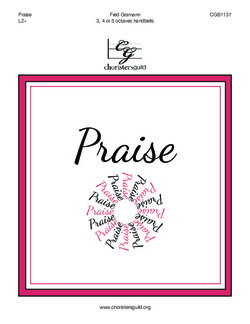 Praise
Composed with massed ringing in mind, this original work lends itself equally well to being rung by a single handbell choir. It is composed in the Mixolydian Mode, thus the white keys on the piano from G to G with a lowered 7th degree (F natural instead of the expected F#). The title can be easily adapted to different situations. At a slower tempo, it might be called “A Modal Meditation.” At a more lively tempo it could be entitled “A Modal Prelude” and if played quickly and robustly, then “Praise”. Be creative! 59 measures. There are two occasions in this piece where “hemiola” is employed: m. 21-22 and m. 53-54. This means that two groups of three beats are replaced by three groups of two beats with the resulting accents on beats 1 & 3 in the first measure and beat 2 in the second measure.

O Jesus I Have Promised