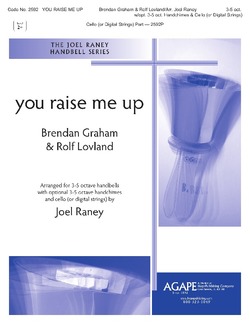 You Raise Me Up
This inspirational song was based on a traditional Irish tune and first appeared as an instrumental piece on the Secret Garden album "Once in a Red Moon." The lyrics were later added and in 2003 David Foster arranged it for the singing sensation, Josh Groban. Joel Raney’s setting highlights the Celtic flavor with the addition of cello to accompany the bells and handchimes. The combination produces a stunning, lyrical ballad with lush harmonies. The positive message of Graham’s text has made this a crossover piece for both secular and sacred events. 94 measures in length, it is scored in C Major and D Major.

Every Time I Feel the Spirit