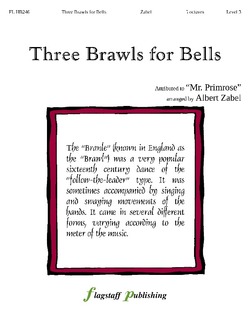 Three Brawls for Bells
The "Branle", known in England as the "Brawl", was a very popular sixteenth century dance of the follow-the-leader type; it was sometimes accompanied by singing and swaying movements of the hands. These "brawls" came in several different forms, varying according to the meter of the music.

"Three Brawls for Bells" has three distinct sections: a poco moderato section, a moderato section and an allegro section. Each may be performed as a separate piece or all three together.

Lord Is My Shepherd

God Be With You