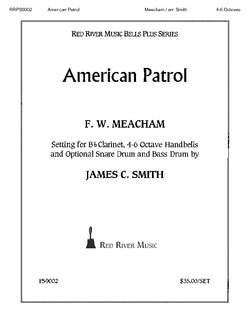 American Patrol
"Bells Plus" is a series of handbells plus other instruments. In this series handbell choirs are a part of an ensemble that also calls for other instruments that are necessary for a complete performance. Each "Bells Plus" set contains a full score, individual instrument parts and a reproducible handbell score with permission to make additional copies as needed for your individual handbell choir. Most famous during World War 1 and World War 2, "American Patrol" is a popular march written originally by F. W. Meacham in 1885 for the piano and later arranged for wind band. This arrangement calls for handbells plus Bb clarinet, snare drum, and bass drum. Scored in F Major, Ab Major, and Eb Major, the work is 205 measures.

Our Song Shall Rise to Thee

Grace Greater Than Our Sin