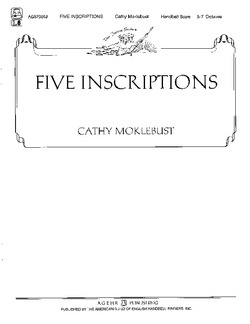 Five Inscriptions
This original composition won the Donald E. Allured award for the Bay View week of Handbells 2000. In the 13th-16th centuries, terse Latin sayings were commonly inscribed on bells throughout western Europe to state a function or attribute ascribed to them. This work comments musically on five inscriptions, whose translations are as follows "I announce the festival", "I call the gathering", "I console the living", "I torment demons", and "I sing for the festival".