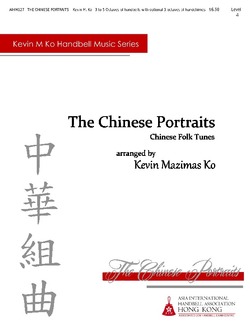 Chinese Portraits
The Chinese Portraits is a suite arrangement by Kevin Mazimas Ko, which consists of three Chinese folk songs. The first section is DU XHU LANG, which means The Pupils. In the ancient Chinese world, besides doing business, becoming a civil servant was another way to bring wealth to a family. It was meaningless to go to school if the pupil could pass the final exam, which was a ticket to becoming a civil servant. The song describes the hard days of study. The second song XIAO BAO BAO is a life-skill learning song. It teaches the young kids not to follow strangers when parents are not near their children. The song is a dialogue between a child and a wolf. The wolf requires the child to open the door for him, but the child refuses to do so. The third song, Song of the Youth, is a dance song from the North of China. It describes the happiness of kids when they can play outside in good weather. Especially in the north part of China, the winter is always long and cold. 135 measures.

What a Friend We Have In Jesus