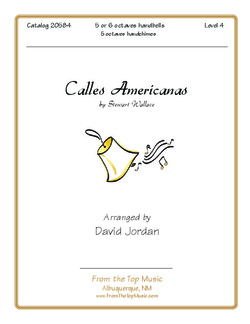 Calles Americanas
This piece, originally composed as a piano duet by Stewart Wallace, has been described as a ‘fun but tricky duet with a pacy Latin beat.’ David has masterfully arranged it for handbell ensemble. With relaxed energy yet truly Latin in feel, it will be a terrific addition to your concert repertoire. (It is also published as a handbell duet with piano accompaniment. Cat. 1091) 88 measures. Keys of Bb Major and C Major.

We Praise You for the Sun