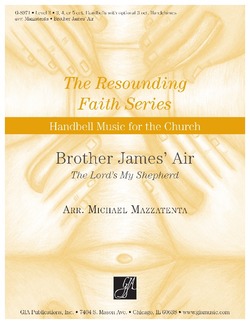 Brother James Air
James Leith Macbeth Bain (1860–1925) was a Scottish hymn writer known to his peers as Brother James. Michael Mazzatenta’s setting reverently pays homage to Bain’s tune and to the tranquil, comforting Psalm 23 text to which it is most often paired. The melody is presented with handchimes over a soft cacophony of random ringing. Later creative imitation of the melody ensues. The music closes, as it opens: serene and untroubled. This is a beautiful piece for weddings, as well as worship. 76 measures. Key of C Major modulates to Eb Major, then returns to C Major.

I Wonder As I Wander

You Are My All in All

Once in Royal David's City