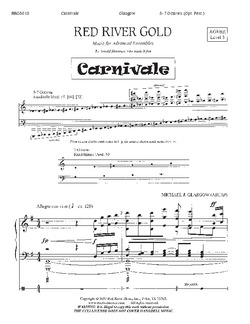 Carnivale
Percussion is used at key points throughout the piece. While the piece does not necessarily lose anything by not including it, it gains much more with the addition of these seven instruments: slapstick, ratchet, slide whistle, cuckoo bird whistle, pop gun, siren whistle and clown horn. Rather than assign one player to be the "percussionist," it is advised that the instruments be spread out among the ringers, so as to have them played from different physical locations. Because most all ringers have a bit of "clown" in them, this piece was written with a bit of "clowning around" built in. So have fun with it and bring out the grins in your audience! Written in G Major, measures total 78.

How Can I Keep From Ringing